Through eight fascinating pieces written by Javier Infante, influences from North African music (Berbers/Amazigans), Sephardic songs and contemporary jazz are intermingled. Likewise, the Dutch quartet pushes the rhythmic character of these songs through its rhythmic strength and innovative percussion sounds. At times, there seems to be a drummer in the room! The vast electric guitar and string solos give rise to a strong creative and experimental spirit, interspersing beautiful melodies with powerful rhythmic passages.

Javier Infante, born in Gran Canaria, has released many albums as a leader, co-leader and accompanist, and his work Solo Session has been nominated for Best Jazz Album at the Spanish Independent Music Awards. With several tours around the world behind him, his music is influenced by Canarian folklore, flamenco, free improvisation, African, jazz and European classical music tradition. 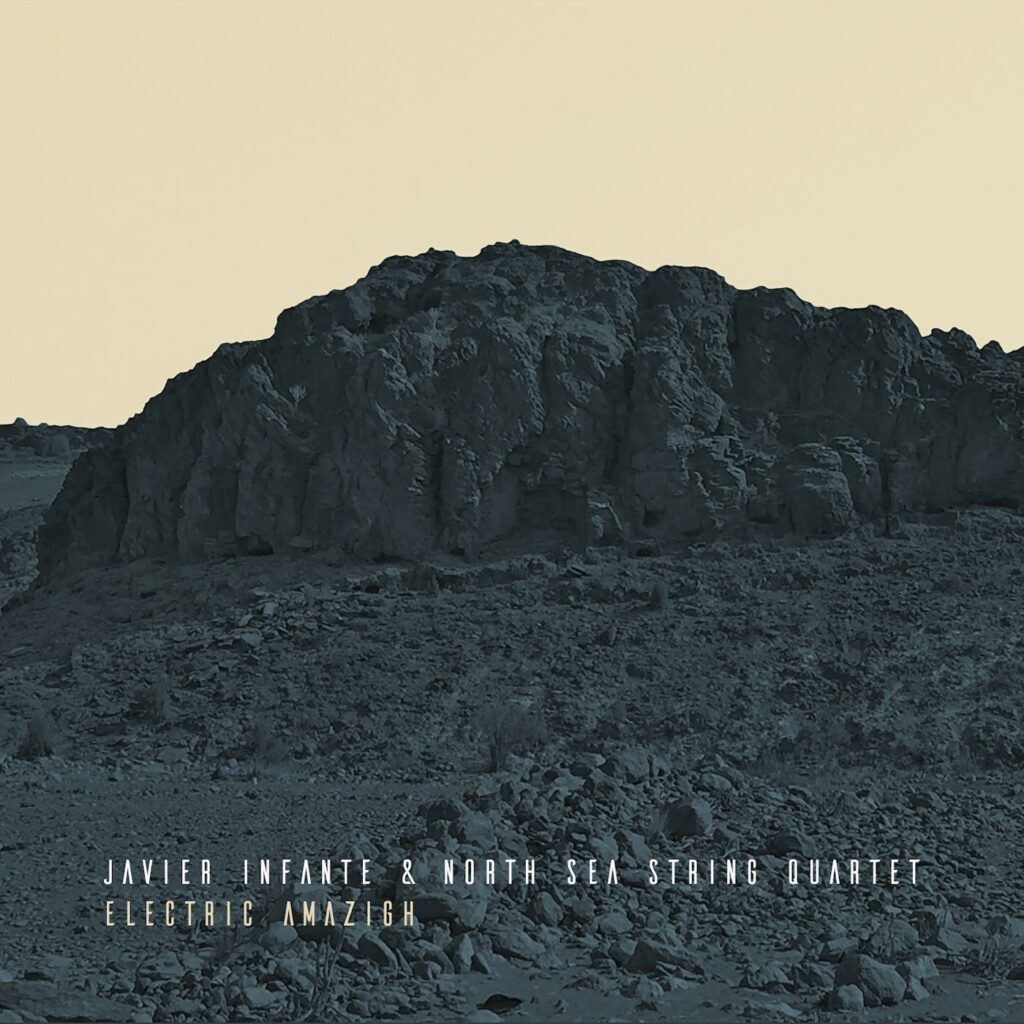 This album is produced with the support of the Sena Muziekproductiefonds and Canarias Cultura en Red.

A number of years ago, as I was watching Tokyo Waltz, a documentary about cellist Yo-Yo Ma, fiddler Mark O’Connor and con arco bass player Edgar Meyer on tour in Japan, I heard Ma admit to his colleagues that he would never be able to match their sense of timing and swing. He couldn’t even hear exactly where he was off, although they had pointed this out repeatedly. All to no avail. The North Sea String Quartet, a group of young players based in the Netherlands, has long crossed that divide. Yes, their line-up is that of a classical string quartet, but unlike most of their colleagues swing and improvisation are second nature to them. Hence their motto ‘Strings That Make You Move’. For new challenges they look farther afield: in adventurous explorations of unknown sonic realms.

While working with vocalist Lílian Vieira they acquired the breezy elegance characteristic of Brazilian samba, and in collaborating with viola picker and singer Roland Satterwhite they made themselves at home in the raw, bare boned world of Mississippi delta blues. Choosing an instrumentalist for their next project helped them to steer clear of the traditional division between soloist and accompanying ensemble.

It just so happened that the new collaborator was handed to them on a silver platter by the organizers of the Festival Canarias Jazz & Más. The quartet members had already admired guitar player and composer Javier Infante for quite some time but had never met him. And since Infante and Pablo Rodríguez both hail from the Canary Islands, it felt natural to use that shared background as a source of inspiration for this collaboration.

To most Europeans, the archipelago is first and foremost a popular tourist destination, but instead of being just a bit of Spain close to the African coast, the islands have been a vital hub connecting Europe and the Americas ever since the sixteenth century. For both Javier and Pablo this meant that the musical backdrop of their youth was an incredibly rich tapestry: lots of Cuban and Venezuelan influences, jazz and pop, the local traditions from the various islands, plus North African and sephardic music. All of these strains ring through in this unique meeting of musical minds, but only after having been leavened and fermented to become ingredients that blend organically.

Ayres del Hierro, for example, was based on melodies and rhythms from the island of El Hierro, and combined with a rhythmical pattern that Infante created with the help of numerology. Starting point for Queso Majorero was a folk song from the island of Fuerteventura, which was transposed to a sephardic scale with an unusual time signature in five-eight rather than the more common three-four.

Bentayga was written as an ode to a famous archaeological site with remnants of the ancient Guanchen, the original inhabitants of the islands who were probably related to the Berber populations of northern Africa. For this composition, Infante chose an African rhythm in twelve-eight and made it sound like a religious chant.

I was amazed to find out that the album was originally conceived as a completely acoustic affair. After listening to the album, this hardly makes any sense at all as the combination of electric guitar and bowed strings sounds so electrifying, exciting and inevitable, thanks in part to the inventive and sometimes unorthodox orchestrations by Infante and Rodríguez.